Christopher Brisley is a machine when it comes to extreme outdoor adventures, he is a world renowned Ultra-marathoner, Ironman, triathelete, mountaineer, and founder of Take a Challenge, a community organization that inspires people to get active and stay fit.

He now has his eyes set on a 600km (372 Mile) long distance hike from London to Falmouth, one of the biggest challenges in his life. “We’re planning on covering roughly 30 – 40km a day, starting on the 3rd September.” said Chris Brisley on his website takeachallenge.org. The hike is considerably hilly, covering South and South West England, following the path of eight National trails, and the total ascent exceeds 16,000m, which is double the height of mount Everest.

This is a huge challenge for Christopher Brisley, but not nearly as challenging as what he faced after his severe bike accident in 2002. Christopher was struck by car during a bike ride from triathalon training, before he knew it he was lying on a spinal board in an emergency room. This devastating injury was surely the biggest challenge of his life, not only physically, but emotionally as his love for all things sports had been taken away.

“I’d spent the previous five years rebuilding my life after I was medically discharged from the Royal Navy with severe breathing difficulties, and my first attempt at creating a new career after leaving the armed forces failed. I lost all my savings in a business venture, a triathlon and running shop, so now I was broke in every possible way!”

“I fought many battles during that period and after a few low years, I realised one of those battles was with myself. Something had to change, physically nothing was going to happen over night, I was in pain whether I moved or not, so I chose moving.”

End Facebook Pixel Code StartFragmentSuntactics is proud to be a sponsor of such an inspiring individual, someone that does not know the meaning of “quit”, someone who, against all odds manages to get back on his feet after a severe spinal injury and do incredible things.

Make sure to keep updated on Christopher’s 600km hiking expedition by following him on Twitter @cbrisley, and his website takeachallenge.org.

Wondering how we stay connected? the power of the sun, great work @suntactics pic.twitter.com/L1OVofukab 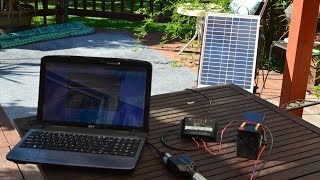 How to build a Solar Laptop Charger for Under $100

Price Increase do to Lack of Materials

Sorry we stopped production of the S5 lite flat panel

Take a look at our Solar Tracker Kit!

Blemished sCharger-14's for Sale on Ebay